We knew this was going to be an important book from the beginning, from the moments the acquiring editors first took a look at the manuscript submission. As the development timeline of a book can be quite a long, it was months after the acquisition that I as Art Director/Designer got my first real look at the manuscript. Editor Carol (@carolchinz) was having lunch with the author at the start of the editing process, and had invited me along to be a part of the discussion, a part of the book. My first words to Caren (other than “such a pleasure to meet you”) were “I’m so glad this side of the story is being told.”

Sachiko: A Nagasaki Bomb Survivor’s Story is a book on just that. Sachiko Yasui was 6 years old when the atomic bomb was dropped on Nagasaki. This story, so elegantly, carefully, caringly written by Caren chronicles Sachiko’s life from just before the bomb blast when her family was struggling with poverty already, to her life after everything she knew was destroyed, her country was reeling, resources were at a minimum, and so many of her family members were dead.

This book is not written to argue the point of the atomic bombs. Were many many lives saved around the world because these bombs were dropped, bringing WWII finally to an end? How long would the war have lasted, how many more lives ruined if it had continued? None of us can know the answers to these questions. This book was written to describe the effects of the atomic bombs on humans, to chronicle Sachiko’s path to peace after, through a battle against cancer, to becoming a peace advocate and speaker later in life. This book is written to spread understanding and peace.

So…yeah, I had some big shoes to fill here with the design.

In that first meeting with Caren we talked about symbols, recurring themes, how the book started, and Japanese aesthetic as we understand it. What parts of this to bring into the book design, what to leave out, what the most important part of the book is, the overall feeling a reader should have when diving in, what sorts of images we will have. Very few family images survived from the time of the bombing, and very few images were taken after the bombing as there weren’t many cameras or money to acquire new cameras in the aftermath.

This conversation led me to knowing the design had to be clean, simple, respectful, weighty, laid out in a manner as to be easy to read, while avoiding cliche and stereotype. Gobs of color weren’t needed. What we needed was to bring as much focus to the emotion of the images did have. So the minimal color palette was essential—calming, warm, inviting, with the occasional touch of orange to grab attention and bring us back to the stroke of destruction, fear, and anger that is the reason for the story.

And of course the interior had to complement the cover design: 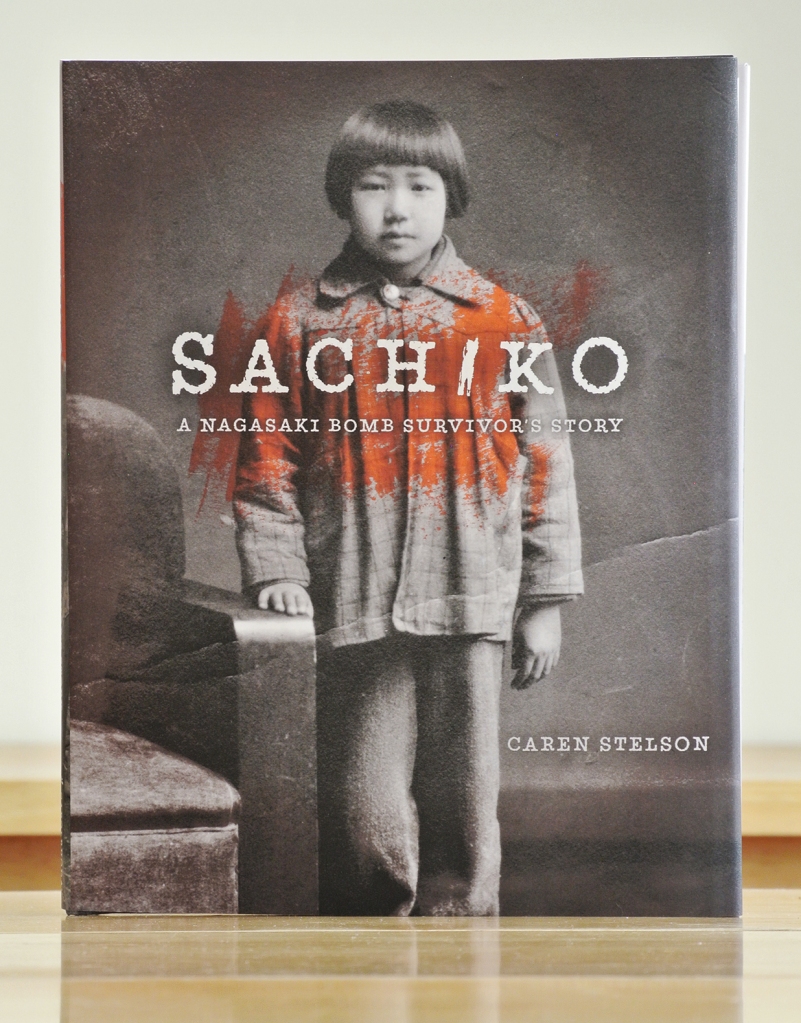 We had to look into Sachiko’s eyes on the cover to immediately draw in the reader, which meant we needed a portrait, which meant we had three surviving images to choose from. This image was taken after the war, after she had survived radiation sickness and her hair had grown back. The orange swash was added to represent the violence of the bomb that ripped apart lives. (And also as a less emotional utilitarian aspect, it helped even out the background color so the white title was easier to get to be legible without heavier photoshop effects. Yes, we deal with both the emotional and utilitarian in design. It’s not all concept & emotion.) The crease in the photo is normally something we would clone out to keep the front smooth, but in this case it gave a hint to the struggle of the story, so it was necessary to leave.

The orange became my highlight color throughout, from the striking orange page 1 to start the book to the little divider on the folios of each page. The recurring tree on select pages shows protection, resilience, growth, and family. Here are a few spreads from the inside:

Interspersed throughout Sachiko’s narrative, as a nonfiction educational publisher we needed to include historical information. As Americans we’re quite aware of the European side of the war, less so about what was happening in the Pacific, in Japan. The information had to be accessible but not distracting to the narrative, so in the design I ended the chapters, where there was already a pause in the story, with a full-spread sidebar of historical information pertinent to that chapter. The sidebars are on warm gray pages to separate them from the white pages of Sachiko’s voice. 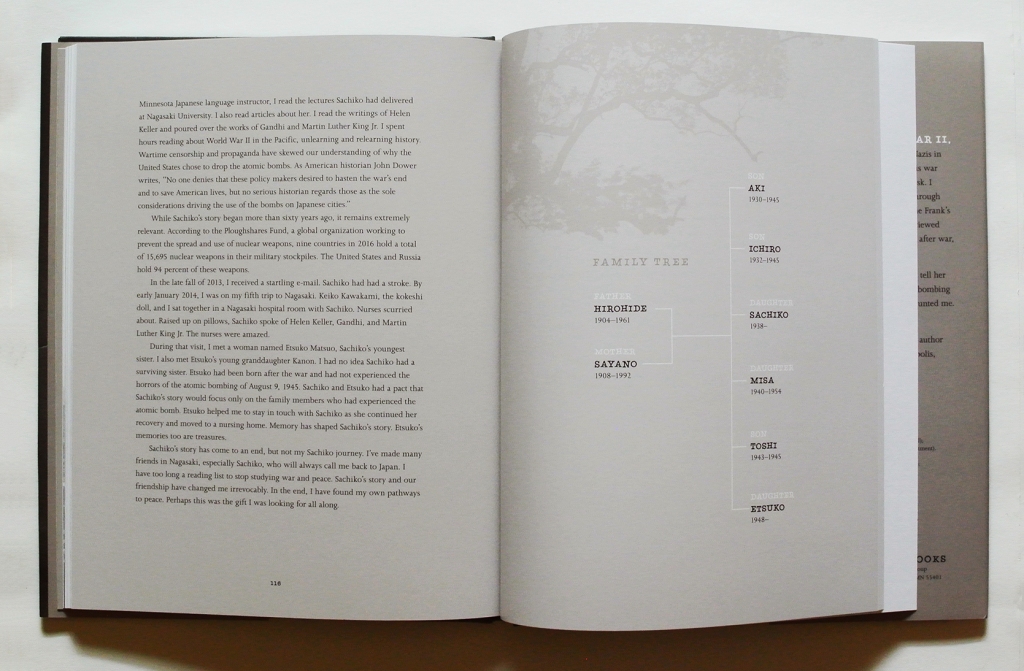 The tree motif was inspired from a pair of camphor trees in Nagasaki that somehow survived the blast amidst otherwise total destruction in the area, and are alive and thriving today. These trees I saw myself on a trip to Nagasaki earlier this year, when a group of us went to meet Sachiko in person, and I stood in awe. As author Caren said on this trip (the editor Carol and I made this journey with her, along with a small group people who had been vital to bringing this book to reality) we brought Sachiko’s voice back to Sachiko, who had lost much of her ability to speak due to a stroke a few years ago. And here she is, sheltered by the camphor trees once again, speaking this time in print to help bring peace to our world: 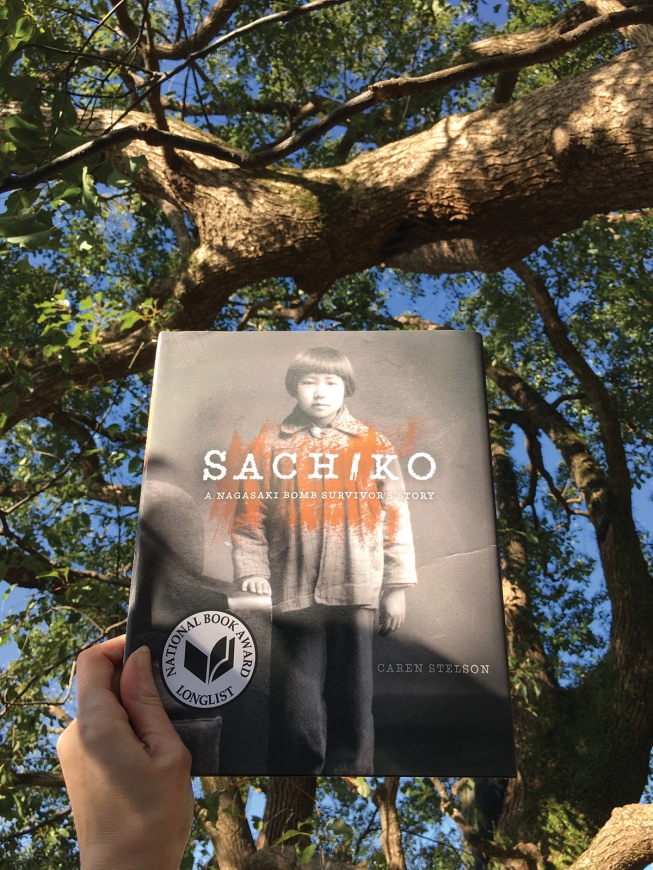 I was lucky to be a part of this book journey and community.