A great friend and I decided to take a road trip this past summer—two weeks, nine national parks, a tent, a 2007 Honda Civic.

Things we wondered: Do we REALLY need to make reservations at all of the parks ahead of time? We will be traveling after labor day when visitation decreases after all… Would we still be friends at the end of two weeks in a car? How does a little Civic drive above 8,000 feet in windy mountain passes? Will our fuel cost estimates be over or under? And most importantly, if a bison decides it just really doesn’t like my car and decides to challenge it to a duel, who will win?

We started the journey on a lovely Labor Day morning in Minneapolis. I picked up Marie, we finished packing the car, dropped off my apartment keys to a friend who graciously volunteered to watch my cat (ornery 15-year-old cat alone for two weeks. What could happen?), stopped at Starbucks for the last city coffee and scone run for two weeks, then off we went on the longest part of the drive. From Minneapolis to Theodore Roosevelt National Park in western North Dakota. 561 miles of flatness. Or really, 600 miles, if you count the 2 mile side trip into a small town to find gas.

You may be confused by the math here—fear not, I have mad addition and subtraction skillz. What I’m saying is 2 miles to a gas station in North Dakota seems like 39 miles when you’re driving on fumes.

TIP#1 ON A ROAD TRIP: make sure you have enough gas to get to a gas station. This may seem easy, but in wide open spaces (of which North Dakota is one) gas stations can be fewer and more far between than you expect.

I think we actually went about 20 miles on empty. Pulling into the gas station was a relief.
So we drove on.
And we drove more.
And yet more, all pretty much due west, without even a curve in the interstate.

This was not what I’d call testing the abilities of the Civic!

But then there came that sudden bump in the road, where I do believe we were airborne for second or two. Civic made it through that obstacle just fine.

Then more driving and a round of the alphabet game. Which became challenging owing to the fact that billboards in North Dakota seem to be harder to come by than gas stations.

About 8.5 hours after leaving Minneapolis, we reach Theodore Roosevelt National Park. The entrance to the park is in Medora—If you’ve not been, Medora is one of those quaint little towns that is obviously old and sells itself on that fact. It is the entrance to a national park after all, where visitors come to expect quaint. I really was hoping to see a freshly painted saloon in the town—that kind of old quaint. If it had been warmer, the ice cream parlor would have been a great place to grab a sasparilla.

The park itself is in the badlands of North Dakota, and doesn’t take camping reservations. There are two campgrounds, one in the south unit of the park where we already were and one in the north unit that was another hour drive away. We opted for the near campground, having already driven enough for the day. We claimed one of the few spots left and set up the tent before heading out to exploring the park. This camping area was close to the river—which will come in to play later, in case you’re wondering why I include such extraneous things.

From the start of the planning, we knew that Theo Roosevelt would be more of a stopover on the way to Yellowstone than a full park visit. Which was a good plan, but dusk to dark really isn’t enough time to explore a national park! We did get around the major scenic drive and saw the major points, even had our first through third bison in the road sightings. Theo Roosevelt really is a lovely park, but falls short of exciting. (at least in our venture—the back country north unit could be a completely different adventure!)

All the layers of sediment in the badlands, deposited dating from 65 million years ago, are varied colors and textures. The hills are not quite rolling—I’d say they have more of a prehistoric look to them. 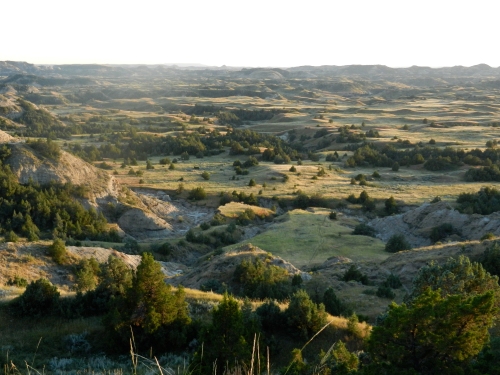 This is due to the way the hills formed and eroded in layers. Each layer of sediment erodes at a different rate, creating the dome shapes, craggy hills, odd shaped pillars, undercut cliffs, and layers of color like you can make in those sand jar craft pieces—but more natural. There is even one layer in the ground of black coal ignited and burned for while, creating the reddish colored layer that stands out amongst the others. We made it to a Peaceful Valley overlook just in time for the last good light of the day. The moon rising above the winding Little Missouri River at the foot of the hills was really a lovely and calming scene to end the day with.

Much of the wildlife in the park was familiar to me, except for one—the wild horses. Sure, I’ve seen horses before, but wild horses seen in their environment are on another level of majestic. Wild horses standing in the middle of the road, however, are unexpected. Driving a foot away from the wild horses in the middle of the road to get around them is filled with anxiety—horses do not like cars, their nostrils flare, their eyes look red and crazy, and the instinctual use of their front hooves is to kill with them. I don’t know what it takes for that instinct to kick in, but I did not want to try this horse’s patience with my car, so I drove by as calmly as possible. This is when it is helpful to have another person in the car. I didn’t really want to stop and roll down my window to take a picture while the horse was glaring in agitation at the strange smaller gunmetal gray iron horse that makes funny sounds. So Marie got the pictures. 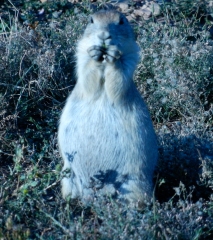 There were so many other wildlife sightings here, chief of among them the prairie dogs. There are prairie dog towns everywhere in this park. I know they’re viewed as dirty varmints by many, but in a national park they are ADORABLE. They stand there and nibble on things, they touch noses, they scamper, they’re just adorable.

After dark and back at the campsite, dinner made, it was shaping up to be a chilly night in the tent. Forecast was for around 40 degrees. This is completely campable weather. BUT, there is a thin margin for comfort at this temperature. My sleeping bag is rated for 40 degrees, and there was a distinct point in the night where I realized I was cold. Upon checking the temperature in the morning (thanks, thermometer in the Civic dashboard) it was really in the upper 30’s. The North Face knows what they’re doing with sleeping bag ratings!

Also happening that night:
Have you ever incorporated actual real life happenings into your half-asleep dreamscape? You know what I mean—a story on the clock radio alarm to wake you up instead works its way into a bizarre dream? Well, yeah. I tend to only half sleep the first night of camping, and wilderness night sounds are both captivating and out of the norm for a city dweller. So when the wild horses (who hang out by the river, where the campground was located) went galloping through our campsite a couple of times during the night, I did have dreams of them. Or more aptly, I had dreams of large scale My Little Ponies with wings crashing into the tent. A restful night, indeed.